The corona crisis – which mindset are we going to adopt?

A year ago, young people’s demand to prioritise sustainability over the economy was seen as naïve. But the situation is different today, and the corona crisis has shown us we need to address this demand. We are asking ourselves how long we want to put up with the restrictions and how much of a drop in our standard of living are we prepared to accept. This then raises the ethical question: is the way we have been living more important than the lives of the people the virus could kill?

From climate denial to corona denial

The mindset that propagates the idea that the coronavirus is harmless is the same as the one behind climate change denial. It embodies the desire to just carry on as before. We pursue a narrative that a good life is inextricably linked to economic growth. This narrative is contradictory. The economy is now taking a back seat and the focus is on saving lives and setting new priorities. It feels like a breach of taboo: old, familiar chains of logical reasoning are being challenged.

Similar to the „CO2 lie”, we now have “covid 19 hysteria”. Some people claim: “It was the same with Sars, swine flu and bird flu. Nothing happened there either. And anyway, 25 000 people died during the flu outbreak of 2017/18 and we didn’t bat an eyelid. People die in traffic accidents, of starvation, from alcohol abuse and in wars, and there are all those other unnecessary deaths we don’t give a hoot about, so why all the fuss now?”

Walls fall first in our minds

Yet there is growing understanding of the rationale for the restrictions. We accept them because almost all of us know someone who belongs to a high-risk group. The harsh herd immunity approach could mean the death of these people. Who wants to say yes to that?

In my book “Mindset Matters” I describe how the fall of the Berlin Wall exemplified how a sudden and profound societal mindshift could happen, literally overnight. On 9th November 1989 we experienced that it is possible to change reality and reinterpret it in a new way. We were willing to give up old ways of thinking, ways we had long known were absurd.

Just as we now also know that we are one human family living on a planet with limited and dwindling resources. So far, though, the emotional strength required to develop effective new behaviours from this realisation has been lacking.

Which walls are now falling in our minds?

Many things we once thought were impossible are happening. A mental wall is crumbling. On a collective level, we are learning to deal with a complex global problem. We are learning what it means to put life before the economy. Taking this decision will not be a walk in the park, but could fundamentally change society.

We are becoming aware that we are an interlinked and interdependent global community. The nationalists who dismiss the virus as someone else’s problem and the economic liberals who see the rising death toll as nothing but numbers are becoming quieter. A secondary response has been the introduction of climate protection measures, such as reduced air and road traffic, which would have been considered utopian but a few weeks ago. We see what we are capable of when the will is there and the necessity is felt.

On a personal level, each of us is thrown back to our own presentness and unknowingness. Disconnected from the momentum of everyday life, we are confronted with new feelings. Who is important to me? What am I doing now? Where is my place? What kind of world do I want to live in? We are faced with our own mortality. The likelihood of getting the virus is real. When we think of our parents, our children and those in risk groups, we feel an intense sense of responsibility. These new feelings create space for concepts that say yes to life.

What do we want to want?

There are multiple indications to suggest that we are not dealing with an anomaly that will only briefly separate us from the status quo and in a few weeks everything will be fine again. We have faith in science and hope in a vaccine, widespread testing and our state institutions. There are signs the situation will be protracted and that much will depend on the decisions we make.

After the Berlin wall came down a friend from Dresden told me: “I feel like I’m on holiday in the West and can’t go home.” Our economic system will temporarily break away from the constraints of efficiency-driven economic viability and follow more the paradigm of public service provision. We will see whether this will just be a holiday or a real shift in values.

1.    Vision – What does the shared vision of the new situation look like?

This vision is still being debated, but it seems not to be a radical “herd immunisation” scheme. We have so far opted to save lives, even if it means experiencing a heavy burden for a longer time and a drop in our standard of living.

2.    Power – What are the power structures in the current system and what is preventing or enabling them?

When it comes to power we see an interesting development. In some countries we see incompetent and ignorant politicians bellowing into microphones, whereas elsewhere expert panels of scientists have established a prudent and rational approach. Who do you think we will trust more in the near future?

3.    Mindset and values – Which emotional values are the drivers of development and with which mindset do we face change?

The third aspect is the most exciting because it is often overlooked, seemingly invisible. Our inner mindset decides which reality we create now. Deep down are we selfish beings who fight over toilet paper, or do we also show a different face.

Someone said to me the other day, “I’d never have thought that life here could be changed so quickly and that so many would take responsibility and go along with it.”

The issue of “public services versus economic growth” will be with us for some to come, so the decisions we make and our mindset are absolutely critical.

Where do we go from here? My father, who had Alzheimer’s, used to answer questions he didn’t quite grasp by saying, “Surprise me.” To which I add, “with the spontaneity of being.” 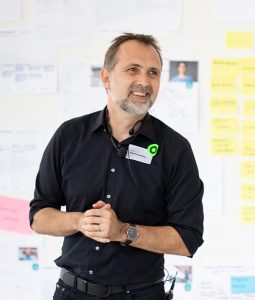